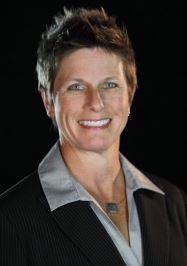 The Julius L. Chambers Diversity Champion Award, which honors an individual who embodies high ethical standards, unquestioned integrity, consistent competence and who champions diversity in the legal profession, was presented to Connie J. Vetter at the Mecklenburg Bar Foundation's Hon. James B. McMillan Fellowship Dinner on Thurs., Feb. 25.
Connie J. Vetter has been the go-to LGBT Law attorney in the Charlotte area for over 20 years, as a lawyer and mediator for LGBTQ clients. Her legal practice focuses on the needs of Lesbian, Gay, Bisexual & Transgender individuals and couples as well as the larger community.
Connie has been active in the community for many years and involved in a number of organizations including Human Rights Campaign, Equality NC, North Carolina Gay and Lesbian Attorneys, Meck PAC, Time Out Youth, and The LGBTQ Community Center, among others. She also speaks about LGBT Law to community groups and business organizations.
Connie is a member of the North Carolina State Bar, the Mecklenburg County Bar and the National LGBT Bar Association. She is a graduate of Northeastern University School of Law and The Ohio State University. Connie’s law practice accepts clients from across North Carolina.