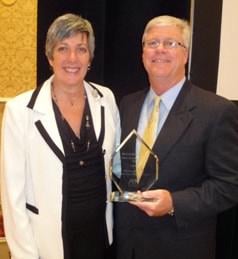 The American Bar Association (ABA) recently named the Mecklenburg County Bar (MCB) the recipient of its 2011 Partnership Award at the ABA annual meeting in Toronto, Canada. The award recognizes bar association projects that increase the participation and advancement of lawyers from underrepresented populations and attract students from these groups to the legal profession.  Two MCB pipeline programs, Lunch with a Lawyer and Diversity Day, were recognized under the award's scope.

An intentional focus on creative pipeline initiatives such as the MCB's Lunch with a Lawyer Program and Diversity Day is critical as we strive to diversify our local Bar and the legal profession, said Kristi K. Walters, co-chair of the MCB Special Committee on Diversity. Over the past five years, through the dedication of committed Bar volunteers, these programs have had a positive impact on the lives of hundreds of students in our community. The Special Committee on Diversity celebrates this important national recognition and it inspires us to continue to embrace new and unique initiatives that will open doors to the legal progression.

Established in 2006 by the MCB Special Committee on Diversity, the Lunch with a Lawyer and Diversity Day programs seek to expose minority students to the legal profession at a young age. Both programs are part of the Committee's larger diversity pipeline which provides opportunities to diverse community constituencies. From eighth grade students to practicing attorneys, the pipeline seeks to recruit and retain minority attorneys to the Charlotte-Mecklenburg legal community.

MCB President Robert C. Dortch, Jr. accepted the Partnership Award on behalf of the Bar along with MCB Executive Director Nancy M. Roberson and MCB Diversity Coordinator Stephanie A. Marella. As we all know, the MCB is a mandatory bar  we're all part of it. And the 'all' is becoming increasingly diverse. One would expect that as our county continues to grow, our diversity will grow with it. The Bar's leadership has embraced and encouraged diversity throughout the organization for many years, said Dortch. It's important that the Bar reflects the diverse nature of the county's citizens. The Special Committee on Diversity continues to do an outstanding job providing opportunities to our underrepresented populations and to generate interest in our profession in those who may never have considered it or thought it possible.

Since 2006, over 500 students and volunteer attorneys have participated in either the Lunch with a Lawyer or Diversity Day program.  Furthermore, both programs work in partnership with local schools and community organizations in an effort to engage a diverse spectrum of students interested in the legal profession.  Volunteer attorneys participating as mentors or program panelists serve as positive role models and provide students with a window into the legal profession.

Mentoring young folks who have expressed an early interest in a legal career is rewarding, said Charles L. Morgan, MCB member and longtime Lunch with a Lawyer mentor. My continued participation in this worthwhile program rests in large part on my desire to provide a positive resource that was unavailable during my formative years. I commend the Lunch with a Lawyer program and fellow members of the Bar who seek to have an impact on the future of our profession."

The MCB acknowledges that the varied perspectives and backgrounds of its members are central to the MCBs success as an organization and are valuable to the clients they serve. In an effort to enhance and support the diversity within the Charlotte-Mecklenburg legal community the MCB continues to encourage all of its members to volunteer and seek leadership opportunities within the Bar.