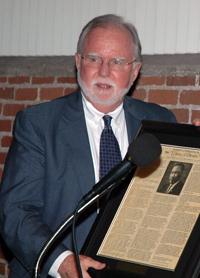 This April the Mecklenburg County Bar (MCB) Special Committee on Diversity honored past MCB and Mecklenburg Bar Foundation president George V. Hanna, III with the second annual presentation of the Julius L. Chambers Diversity Champion Award. The Award, which was presented to Hanna at the 2009 McMillan Fellowship Fund Dinner, celebrates those who have made a significant contribution to diversity and equal opportunity in the Charlotte-Mecklenburg legal community.

The award reflects George's "passionate advocacy for making diversity a key focus of our Bar," including his pivotal role in founding the MCB Special Committee on Diversity, said Norfleet Pruden, current Committee member and attorney with K&L Gates. Since its creation in 2004, the Committee has launched a number of initiatives to diversify the local legal profession, including: the Charlotte Legal Diversity Clerkship program, Lunch with a Lawyer, the Diversity Day program for undergraduate and high school students of color, the Diversity Initiative, and the recruitment of a fulltime diversity coordinator. The Committee continues to provide support for local minority Bars through various partnerships as well.

Hanna, a trial attorney with Moore & Van Allen, has served as a member of the MCB Volunteer Lawyers Committee for more than ten years. He continues to serve as a member of the North Carolina Chief Justice's Commission on Equal Access to Justice, and was a former board chair for Legal Services of Southern Piedmont and the Children's (currently referred to as the Council for Children's Rights).  Outside of his professional and community commitments, Hanna places a priority on spending time with his grandchildren.

The Award is fittingly named after its first honoree, the distinguished civil rights attorney Julius L. Chambers.  Mr. Chambers represented the plaintiffs in the Charlotte-Mecklenburg school desegregation case in which the late James B. McMillan, whose memory the McMillan Fund honors, was the presiding judge. Since 1995, the McMillan Fund has supported justice and innovation within our local legal system by awarding law students summer fellowships in public agencies. These fellowships are funded in large part by the annual dinner.