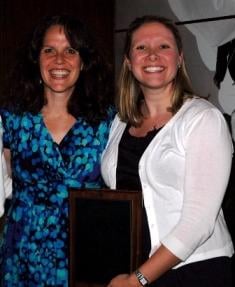 "Erika Olson has been a lawyer in Charlotte for five years but her contributions to the profession and the community rival those of much longer-tenured lawyers," said Sally Higgins of Higgins Law Firm. "She exemplifies professionalism, commitment to the highest ethical principles, zealous advocacy and a dedication to her clients which make her a model young lawyer with whom her colleagues are proud to be associated."

In 2009, Olson contributed 140 hours of pro bono legal service.  She provided leadership to the Mecklenburg County Bar's Volunteer Lawyer Program as co-chair.  Olson sits on the Board of Directors at the Summit House and recently served as co-chair.  In addition, she volunteers her time with the Mecklenburg County Bar's Continuing Legal Education Committee and the Charlotte Women's Bar's Service Committee.

"Erika is a quiet, unsung hero that continues to make a difference in so many lives," said Donna Price, Summit House Site Director. "Erika is one of the great lawyers in the Charlotte area and I applaud her for her work."

The MCB YLD Young Lawyer of the Year is presented annually in recognition of a young lawyer who has made outstanding contributions to the practice of law and the Mecklenburg County community as a whole.   A young lawyer is a practicing attorney who is under 37 years of age or in their first five years of practice.