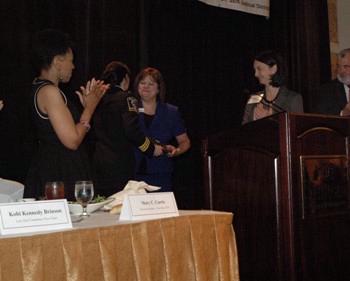 Anne Pfeiffer, Director of Pat’s Place Child Advocacy Center, received the 2014 Liberty Bell Award at the MCB Law Day Luncheon on May 8, 2014.  Ms. Pfeiffer has dedicated more than a decade in service to our community driven by the ultimate goal of ending child sexual abuse in Mecklenburg County.

Ms. Pfeiffer founded Pat’s Place Child Advocacy Center more than 10 years ago, recognizing a need for community wide outreach, education and training. Her pioneering work for the treatment of child sexual abuse has expanded to include new advocacy in prevention efforts as well as crucial programming in human sex trafficking.

In partnership with the Charlotte Mecklenburg Police Department, Ms. Pfeiffer spearheaded a new program to identify and interview child victims of sex trafficking and to create a safety plan for these vulnerable members of our community.  Pat’s Place Child Advocacy Center has also recently expanded its resources to provide additional forensic interviews for child victims of sex trafficking. Her efforts support an innovative, collaborative and holistic approach in responding to a critical need and assisting child victims.  These forensic interviews conducted by her teams of interviewers and family advocates eliminate repetitive interviews by multiple agencies. Without these efforts, repetitive interviews can cause more trauma for the child, and create statement variances that may lead to obstacles to prosecution.

Ms. Pfeiffer has also represented Mecklenburg County and its children in Raleigh when advocating for fair and equitable allocation and distribution of taxpayer funds for local child advocacy centers and the children they service.  In 2013, she was instrumental in establishing the new allocation formula for Governor’s Crime Commission funding that guarantees that every child advocacy center in the state will receive support.

Ms. Pfeiffer continues to lead Mecklenburg County’s efforts to implement systemic change to improve this community’s response for child sexual abuse victims and to work with community partners, in particular law enforcement and the District Attorney’s office.  She exemplifies the highest standards of public service and has been instrumental in assisting our courts and the justice system to function in a manner to meet the special needs of our most vulnerable and underrepresented children.  She has given these children a voice and exemplifies many of the pillars of the Liberty Bell Award.