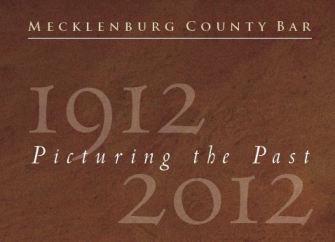 Picturing the Past: A History of the Mecklenburg County Bar

This exhibit graphically depicts the history of the Mecklenburg County Bar.  It was featured at the Levine Museum of the New South January 2012 - June 2012 and is now displayed at the MCB Center.

An Independent Profession:  A Centennial History of the Mecklenburg County Bar

By Marion A. Ellis and Howard E. Covington Jr.

An Independent Profession begins long before the first formal organization of the local bar. It traces a two hundred forty-three year story from one lawyer and a one-room log courthouse in a frontier colonial backwater through the legal profession's role in shaping, and in turn being shaped by, the growth of a community to its present-day role in the affairs of a major American city. And it tells this story against the backdrop of the political, economic and social evolution of the community, the state and nation. It moves from a duel between two eighteenth-century historical figures (both attorneys) to personal correspondence between a judge and a lawyer, looking back at the end of bitterly contested litigation that created a national model for dealing with racial segregation in public schools. It covers the 1920s controversy over Darwinsim and the struggles over labor unionism in the South, climaxed by the Loray Mill murder trial that attracted the attention of the nation.

Copies of "An Independent Profession:  A Centennial History of the Mecklenburg County Bar" are available for $24.95.

Mecklenburg County Bar Centennial Celebration:
Once in a Hundred Years 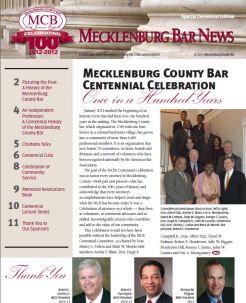 January 2012 marked the beginning of an historic event that had been over one hundred years in the making. The Mecklenburg County Bar, which originated in 1769 with one lone lawyer in a colonial backwater village, has grown into a community of more than 4,600 professional members. It is an organization that now boasts 70 committees, sections, boards and divisions and a network of volunteers who have been recognized nationally by the American Bar Association. The Bar's Centennial Celebration aimed to honor every attorney in Mecklenburg County.

The goal of the MCB's Centennial Celebration was to honor every attorney in Mecklenburg County - both past and present - that has contributed to the 100+ years of history, and acknowledge that every attorney's accomplishments have helped create and shape what the MCB has become today. It was a Celebration of attorneys as a whole - their lives as volunteers, as courtroom advocates and as skilled, knowledgeable citizens who contribute and add to the value of our community.