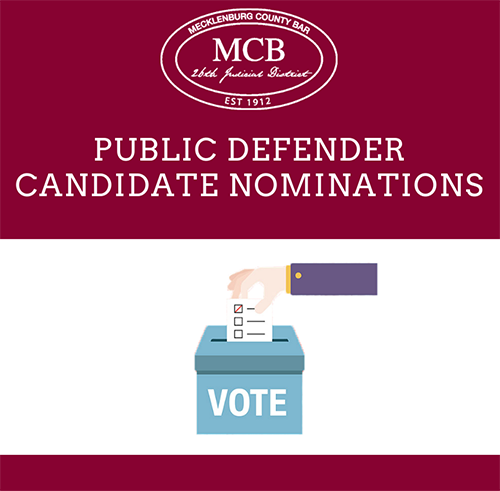 The term of office of the Public Defender, currently held by Kevin P. Tully, will expire on June 30, 2019. Mr. Tully plans to seek reappointment. A new four-year term for this office will begin on July 1, 2019.

Any active member of the Bar who wishes to be considered as a candidate for nomination for Public Defender should send that request to PDelection@meckbar.org or to Mecklenburg County Bar, 2850 Zebulon Avenue, Charlotte, NC 28208, c/o MCB Interim Executive Director Leah Campbell. Candidates for nomination should be received no later than May 9, 2019.

At least two and no more than three candidates receiving the highest number of votes shall be certified as nominees to the Senior Resident Superior Court Judge. The Senior Resident Superior Court Judge must name a public defender from the two or three names submitted by the MCB and one name submitted by the Director of the Administrative Office of the Courts after consultation with the Director of the Office of Indigent Services per N.C.G.S. 7A-498.7(b).