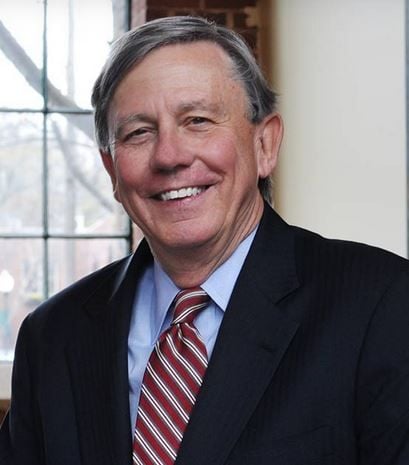 The criteria for the Ayscue Professionalism Award embraces sustained, outstanding service to the Bar and the community at large, that may serve as a personal and professional inspiration to others. Jon Buchan's professional career and his life of service to the bar, to the justice system, and to the community make him an exemplary model of the qualities this award was established to recognize. It is for these reasons and many more that we are proud to award Jon Buchan the 2019-20 Ayscue Professionalism Award.

After three years as a reporter, Jon left for Duke Law School, where he earned his law degree in 1978. His life in the law began when he came to work as an associate at Helms, Mulliss & Johnston in Charlotte, the firm that represented The Charlotte Observer. In the early 1980s, the Observer lured Jon back briefly as its Government Editor, but he ultimately realized he belonged in the practice of law and was welcomed back to his old firm. He practiced as a partner in that firm and its successive iterations (now McGuireWoods LLP) until the end of 2015, when he joined Essex Richards P.A., where he continues his practice.

Jon has rendered outstanding service to the Mecklenburg County Bar through his efforts as a president of the MCB. His year in office was marked by high creativity and high activity. During his tenure: the Special Committee on Diversity was created; the MCB Speakers' Luncheon program was established; a weekly "Ask a Lawyer" program was launched with TV News 14; a weekly "Talk to My Lawyer" column was launched in The Charlotte Observer; Charlotte hosted the North Carolina Court of Appeals for two days of oral arguments, for the first time since 1989; and the first Judicial Recognition Dinner was held to honor the federal judges of the Western District of North Carolina.

Jon's leadership and involvement in the MCB and MBF did not end there. He went on to chair the Bar Leadership Institute in 2007-08. He co­chaired, with George Hanna, the Memorials Committee from 2010-14, and he continues to serve as a committee contributor. He was also a member of the Board of the Mecklenburg Bar Foundation from 2010-13.

Jon's service to the community extends beyond his leadership roles in law-related activities. In 2004-05, he participated in a signature program sponsored by the Community Building Initiative, a non­profit organization established by government and civic leaders to achieve racial and ethnic inclusion and equity in the Charlotte-Mecklenburg community. The CBI's year-long Leadership Development Initiative program, in which Jon participated, supports community leaders in the roles they and their organizations play in building a more inclusive and equitable Charlotte-Mecklenburg.